Awards were handed out to some of the 545 16-24 year-olds supported into paid six-month placements by the Partnership through the government’s Kickstart Scheme, launched in 2021 to tackle youth unemployment caused by the pandemic.

Guests at the event included representatives from the Kickstart Housing Partnership which comprised 84 organisations from the public, private and voluntary sectors, with 58 from the housing sector including Optivo, Peabody and Unity Housing Association.

“I’m immensely proud of the Kickstart Scheme and the young people and employers up and down the country that have contributed to making it a real success. Clarion are a brilliant example of this, by employing 130 young people who were most at risk of unemployment due to the pandemic in exciting new roles such as IT, marketing and customer services.

“The six months in a Kickstart role are just the beginning for most young people getting onto the employment ladder, and we are committed to supporting them to unlock the opportunities and long-term careers they deserve.”

Through the Kickstart Scheme Clarion employed 130 young people in roles from marketing and customer services to IT and Clarion Futures, the charitable foundation of Clarion Housing Group. Clarion Futures mentors provided in-work support and training throughout their placements, as well as helping them identify routes to progression.

More than 60% of those who took part in the scheme across the Partnership progressed into permanent roles, apprenticeships or further education following their placements, ensuring that Kickstart will have a positive and long-lasting legacy.

“We’re proud to have led the Kickstart Housing Partnership which was a great example of government and the housing sector working together to meet common goals. Working with our partners we supported more than 500 young people into placements through the scheme, helping them take their first step on the road to a fulfilling career.

“The event was a chance to celebrate the achievements of all of the Kickstarters supported by the consortium, and it was fantastic to hear about the progress some of the young people have made since participating in the scheme which has made a difference to so many lives.”

The award winners were chosen from more than 90 nominations from across the Partnership, and represent a number of organisations across the sector including PA Housing, The Guinness Partnership and Nottingham City Homes.

Sam Bagshaw, Customer Relationship Apprentice at Clarion Housing Group, was named Outstanding Top Performer, fighting off competition from shortlisted nominees including his brother, who also joined Clarion as part of the Kickstart Scheme. He said:

“I'm absolutely delighted to win the award for Outstanding Top Performer and want to say a big thank you to my team who helped me settle into the role and have always supported me along the way. It's brilliant to see Clarion celebrate the achievements of Kickstarters like me by organising these awards, and to win shows that hard work really does pay off. 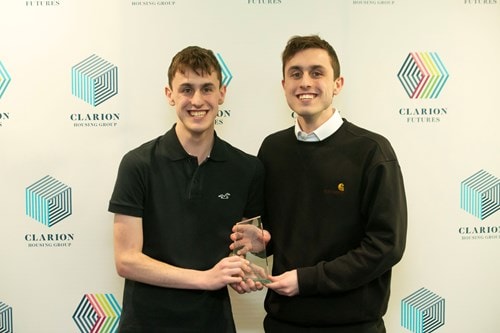